Do you want an estimate for your AR app idea? Get it for free now! 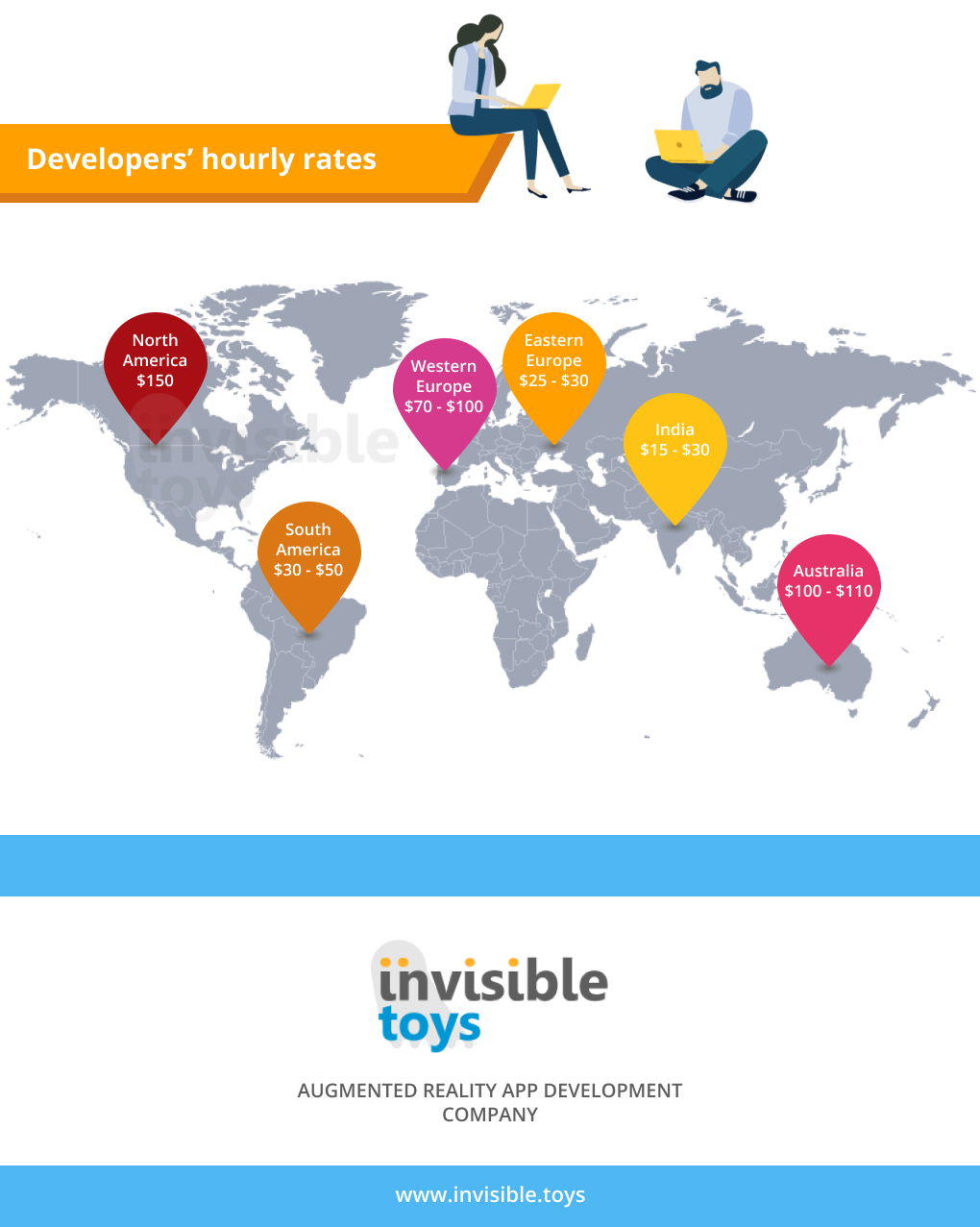 What tops a prospect’s list of concerns when looking for an experienced Augmented Reality app development company?

“How much does it cost to get an Augmented Reality app developed for my business?”

When it comes to pricing, there is no clear-cut formula—just estimates. Augmented Reality app development costs vary greatly based on different app types: it ranges from $5,000–$10,000 for a simple demo app developed in 160 working hours to $300,000+ for a feature-rich, custom-built app that takes nine months and longer to develop.

Predicting how much Augmented Reality will cost

There are three main components to consider and include when pricing an AR app development costs: scope of work, timeline, and development team:

Remember: Visual design is absolutely crucial to obtain a fairly close estimate. No reliable estimate on Augmented Reality app development costs is possible without awareness of the visual part of the future app.

Demo and MVP apps are used to present an idea to a target audience in an engaging manner. These apps usually have a simple structure and user-friendly, intuitive UX, so that an average user can enjoy it on any smartphone—even a relatively old one.

This type of app usually has 1–5 AR models onboard, 1 key feature and requires zero learning from users.

To save costs, a demo app seldom includes a custom logo.
How much does AR cost in this case? Costs include the following:

Please note: Invisible Toys can provide a simple demo AR app and have it launched within 20–22 business days or 160–176 working hours. Definitely “app enough” to test target audience reaction and decide whether Augmented Reality is the right growth direction. (For the vast majority of businesses, having a demo AR app results in a tremendous step up. For example, check out how AR boosted up print ads.)

The following examples include simple demo / MVP AR apps you can get for your business:

A simple app with custom features has a branded logo and a higher number of features than the MVP with the aim of satisfying user’s needs / wants. This kind of AR app can be used as a configurator or catalog, including the following features:

Different kinds of configurators fit within this category. For example, Roomle furniture configurator makes it possible to choose a type of furniture, set up the chosen size, and see its real dimensions and compatibility with a room interior via the smartphone screen.

It is also possible to add a cart feature to this kind of app: chosen models are available for purchase, and voila, a new, convenient sales channel opens.

Development effort and cost of Augmented Reality are usually distributed in the following way:

So, if you want a catalog that is easy to maintain and manage without extra help from the developers’ side, we can make one for you based on our special framework. This way, you still get a custom app but solidly based on a stable, workable solution.

It’s no big secret that the benefits of Augmented Reality in manufacturing are enormously rewarding. Augmented Reality can be used for staff training and knowledge distribution, quick referencing, and cooperative work. It can also help with indoor navigation and workload optimization.

For example, Bosch Augmented Reality app helps workshop staff get all relevant information on car repair and maintenance available literally in front of their eyes. The app displays the order of operations and instructions for each operation together with required tools right in the place where they are needed.

Enterprise-level apps include management systems for fast and efficient development and publishing of AR content in order to maximize support of workflow inside workshops.

Also, this kind of app makes it possible to track inventory when looking for needed tools and spare parts.

How much does AR cost on the enterprise level? Below are estimates for development of a custom AR app:

An important note: enterprise-level AR apps often require special AR goggles such as Microsoft Hololens. When starting AR app development, keep your target platform in mind. When an AR platform is new and not widely adopted, it might take developers—even experienced ones—more time to learn its specific aspects.

Hourly rates vary depending on the developers’ location. Rates decrease from west to east: US- and Canadian-based companies have the highest rates followed by Western Europe. Next comes Latin America and Eastern Europe. Eastern-Asian countries, such as China, India, and Vietnam, offer the lowest development prices, but the lowest price might mean cheapest and, consequently come at a cost. Also, do not underestimate the role cultural differences play when choosing a development team.

According to pricing on the website of the Washington-based research company, Clutch, development charges vary, as follows:

The hourly rate can vary depending on the amount of work and its complexity, but the rate includes the per-hour work rate for each of the team members unless otherwise specified.

An important note: look for professionals who place a high value on their work and reputation. Do not search for and hire the cheapest development team in the market. You might win the app development lottery—then again, you might not.

Great developers invest their time and money into mastering their skills: they are not likely to work for low rates.In return, you get quality and lowering Augmented Reality app development costs in a long run.

Anything else you should keep in mind when looking for the best Augmented Reality app developers for you?

First, Augmented Reality costs for app maintenance must be mentioned. Different kinds of apps require different kinds of hosting, but the general rule is it must be an established hosting provider with a broad band channel.

Second, the app must be highly scalable. Too often, scalability can be an issue when an app gains traction. For example, lack of scalability played a bad joke on Pokémon Go: the game became popular rapidly, but the development team was unprepared. The end result? Freezing apps, millions of upset fans from all over the world, and high abandonment rates. True, Pokémon Go bounced back—but you might not.

The information below is for reference to show the difference between technologies used to create different types of AR apps.

Unity – cross-platform engine and software developers’ No. 1 choice. AR developers cannot help but use it every day. Most AR apps successfully run a Unity engine under their hood.
Limitations: lack of WYSIWYG feature in the editor
Significant apps: literally thousands

If you need more information on the topic, you can get more insight in our study of best AR SDKs.

Augmented Reality costs are, at times, challenging to nail down because some types of work on a project might take longer due to unforeseen challenges (e.g., working with a beta version of a new feature, changes in recognition algorithms, OS updates, etc.) This is why it is crucial to select a reliable partner able to understand your business and your business goals, a partner who offers a relevant solution specific to your needs—and keeps promises made.

Last but not least. Once launched, the app becomes both a source of revenue and of expenditures. The app might require regular payments on subscriptions for third-party services, server support and maintenance, and updates. Otherwise, it quickly deteriorates frustrating end users and giving you bad press.

Look for a responsible person or team who will keep an eye on your app ensuring it works smoothly. This is the best way to save Augmented Reality costs.

You can get a simple demo app taking less than 160 working hours.

But Augmented Reality app development costs more when you want an elaborate app with custom design and complex app logic.

However, if you want concrete numbers for your AR app idea, click on the link below and send us a message.
I want to discuss an AR app

Virtual Reality in Education:
Your Ultimate List of 2021 Cannot-Miss Apps